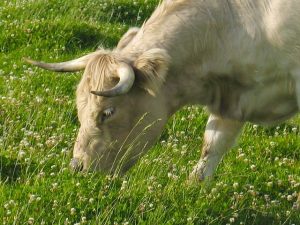 A cow’s diet is pretty simple since it contains hay, grass, corn, and legumes. On the one hand, cattle get all the nutrients needed from these, but, on the other hand, there are always dangers because their organism might react in a negative way.

To be more precise, the topic today is if clover is edible for cows. Clover is a legume, and legumes are an essential part of a cow’s diet.

However, there are kinds of clover that can cause health problems to cattle. The question is what will you do when a problem like this appears, and, more importantly, can cows really eat clover?

What Can Clover Cause To Cows

As we said before, legumes must be included in a cow’s feeding program. They contain proteins that are beneficial for their health, and by staying green for more time than other pasture feed, they keep some important nutrients longer.

Clover does not cause health problems for cows in general, as long as it’s not moldy. If that happens, it has a substance, coumarin, which becomes dicoumarol.

Dicoumarol sabotages Vitamin K’s presence in a cow’s metabolic system, a situation that sometimes can be lethal.

Moreover, there is a condition called pasture bloat. It may happen from the large consumption of legumes and it will cause a quick death to the cow.

When the hay has a very big amount of clover in it, the froth will be produced into your cow’s belly. It will result in digesting problems and eventually a very quick death (3-4 hours) for the cattle.

Types Of Clover For Cows and How Dangerous They are

Nevertheless, some clovers are edible for cows, and some aren’t. So, the first step is to find out which types of clover are dangerous and what kind of problems they can cause.

Sweet clover and Yellow sweet clover can actually cause very serious poisoning to cattle. They are the ones in which coumarins convert to dicoumarol when mold makes its appearance. The reduction of Vitamin K leads the cow’s system in two different, but very negative ways.

Firstly, it might cause abortion to pregnant cows, or health issues to the baby calf when is born. Secondly, this provokes bad blood coagulation. This condition will be the reason for hemorrhages into the muscles and joints, hematomas, dermal pigmentations, and finally the death of the animal.

Faulty blood coagulation might not be visible at first, but you will find out about it if you observe the cattle closely. It might take weeks until the first death occurs, but it will be the sign that you have to begin treatment for the cows.

White clover is a type of legume that is nutritive due to high protein content which improves digestion. Also, it has been proven that it’s beneficial for dairy cows because it helps them in their milk production.

On the other hand, though, it is from the legumes that can cause pasture bloat. In fact, white clover is one of the most dangerous plants for that case. There were instances where a very high number of cattle lost their lives because they consumed more white clover than they should!

These kinds of clover are also likely to cause pasture bloat to cattle. Although the risk is not as high as white clover, they still might be hazardous when they appear in high quantities in the pasture.

The only of the three which can cause another issue is Alsike clover. When consumed and the cow is out in the sun, some dermal problems like red muzzles and burnt skin might appear!

Like other varieties of clover, these are also high in nutrients and proteins. The difference is that they are not so risky for cattle to feed on them.

Balansa clover has a low possibility to cause pasture bloat to cattle and is considered safe in general. Arrowleaf and Berseem clover are considered to be the safest types. They do not cause bloat and you can feed them to your animals without fear.

How to Feed Clover Your Cows

If you got a little anxious about the dangers that exist in using clover to feed the cows, here is some advice to protect them from these diseases:

Finally, I believe that it is safe to answer the question: “Can cows eat clover?”. Well, they can, but in the proper amount and in proper conditions. Clovers can be very good for their health, but they could also cause their demise.

If you are really looking for a piece of advice, prefer varieties of clover that are not so dangerous and always make sure that the grazing fulfills all the prerequisites to own happy and healthy animals!