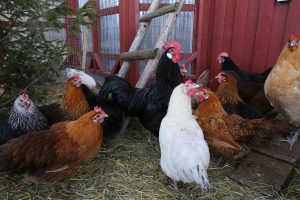 Keeping chickens isn’t as easy as you might think. Naturally, they’re far easier to care for compared to other animals, such as pigs and cattle, and they need a smaller amount of space, too.

However, if you don’t make sure that your birds have enough room, they can become stressed and develop a variety of diseases and behaviors that you don’t want your flock to be affected by.

If you’re a newbie when it comes to farming chickens, you might also not be aware of the fact that some states have poultry buying regulations in place.

These have been created to make sure that some people don’t get chickens as pets, so in most places across the United States, you’ll have to get at least six chickens legally.

Without further ado, let’s move on to the topic of today’s article and discuss what space requirements chickens have.

How much space do chickens need?

There isn’t a golden rule when it comes to raising chickens, and the reason for this is that you need to first think of the number of birds you want to have and the amount of room you have available for them.

Here are a few questions that you should ask yourself before becoming a chicken farmer.

We’ve already mentioned the regulations that some states have, so if you’re just looking to get eggs for your family, you might do with just six laying hens. So, how much space would you need for them?

Well, the short answer to this question is that you’d need about 110 square feet for six chickens, with a run of at least 90 square feet and a coop that measures a minimum of 18 square feet.

Each chicken typically requires about 3-4 square feet of coop space, especially if we’re dealing with adults.

There’s also the possibility of you not having enough outdoor space for so many chickens, so in this case, you’d have to keep them in a larger coop.

The coop is a great idea as it protects your birds from predators, keeps them warm during the night, and it also gives them a safe space to lay their eggs in. You can make do with less indoor space if you have more range outside of the coop, but if you don’t, you’ll need to get or build a bigger coop.

As you might know by now if you have done a bit of research on your own, there are lots of chicken breeds out there. Some of the larger ones are commonly used for meat consumption, so you aren’t going to be keeping them for as long as your laying hens.

Large chickens typically need about 8 to 10 square feet per bird outside their pen space and about 2 square feet each in the chicken coop.

By contrast, Bantam chickens need just 4 square feet per bird if you keep them free range and approximately 1 square foot per bird in the chicken coop.

Why you shouldn’t get more chickens than you can keep

You might feel tempted to get more chickens than you can handle, especially if you’re a beginner in terms of raising chickens. But what you might not know is that overcrowding can be rather dangerous, both in terms of potential medical problems and in terms of how your birds behave.

First of all, many municipalities have rules with regard to the number of chickens that you can keep depending on the amount of space you have available. If you have just six chickens, all of them will have to be hens so as not to be stressed by a rooster.

What are the main problems that overcrowding can cause?

Chickens that are overcrowded can become very stressed, but not only that. If they are kept too close to each other, you might find broken eggs simply because they get stepped on by other birds, or worse, they can even peck them and eat them.

Most birds that live in an insufficient amount of space don’t lay as many eggs as those that have more room to roam in. All in all, you’ll notice a drop in egg production, misshapen eggs, or dirty eggs more frequently if you don’t give your poultry enough space.

Although they might not give you this impression, chickens have hierarchies put in place. There are dominant chickens that can be extremely stressful and aggressive toward others, especially if they are overcrowded.

Not only will they exert their dominance by pecking at the other birds, but they will also try to eat more, meaning that the rest of your flock isn’t going to get the right type of nutrition for growth and egg production.

Socially aggressive roosters and hens can attack vulnerable chickens, and it can get so bad that you might notice unnatural behaviors such as cannibalism or constant sores and lesions on your birds.

In a nutshell, cramped chickens are unhappy chickens, and they are more likely to become obese, suffer from gout, or have less access to clean food and water.

As you know, there are some infectious diseases that chickens can develop and that you might have to vaccinate them against right after getting them. But there are other microbes that are extremely common among them, and that can cause serious health problems if you keep too many chickens in an insufficient amount of space.

Overcrowded chickens have a higher likelihood of developing and constantly suffering from a variety of parasites and bacterial diseases, but also chicken mites, coccidiosis, aspergillosis, and even fowl pox or Marek disease.

The more chickens you have and the larger the area that you put at their disposal, the more you’ll have to work to clean the coop and the outside.

Totally cleaning out the coop from time to time is necessary as bedding filled with droppings can become the perfect environment for bacteria and parasites, which can cause serious diseases in chickens.

You’ll have to manage as best as possible with partially cleaning your chickens’ living space every day, but in short, having more chickens is synonymous with more effort on your behalf.

Check out our new article about chicken poop.

You might think that bigger is better when it comes to a chicken coop, but that’s actually a myth. If the coop is too large and the chickens are just a few, they will have a hard time keeping warm in the cold season.

That’s why the ideal chicken coop has to be around 3 square feet per chicken. If you have six chickens, that means that your coop will have to be around 18-20 square feet.

When it comes to nesting boxes, you can opt for individual or open-plan ones. If you go for the second choice, for six chickens, you’ll need a nesting box that’s at least 6 feet in length and 1 foot in depth.

In the end, the roaming space for every bird also matters a lot. Every chicken needs a roaming space of at least 15 square feet, meaning that you’ll have to ensure about 90 square feet for six chickens.

If you want to grow free-range chickens, you’ll have to supply them with a minimum of 20-25 square feet of outside space.

Breeds that do well with less space

Not all chickens are the same, so that’s why they have different requirements. Miniature chickens don’t need as much space as their full-size counterparts.

There are some breeds that do best indoors and with a limited amount of room and they range from Delaware and Brahma to Silkie and Wyandotte.