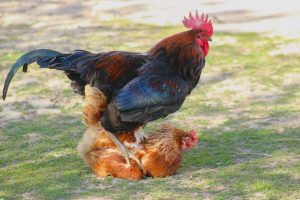 How does a rooster fertilize eggs? The question sounds awkward, but those interested in raising chicken often as it and for good reasons. It is essential you know this, especially if you are interested in breeding chicken to begin a flock or to sell chicks.

The eggs you see on the shelves (or Egg Skelter) at the food store aren’t fertilized and subsequently cannot hatch into chicks. So, if you plan on starting a new flock, you have to ensure they are fertilized. You do not want to incubate eggs that will not hatch because they are unfertilized.

When Do We Consider Eggs Fertile?

We have already said that an egg will only yield a viable chick if it was fertilized. Fertilization happens only if a rooster successfully mates with a hen before the egg is formed. Keep it in your remembrance that hens will still lay eggs even if fertilization does not happen.

You are unlikely to find roosters in production-inclined poultry farms. The only exception is when such farms need a new flock of egg-laying chooks. Small or hobby flocks often have roosters because they are not production-oriented.

Roosters will always mate with their female lovers all year round. However, hens will not breed until the condition is optimal when days begin to stretch longer at the beginning of spring. A hen that decides to incubate her eggs is termed broody.

To help us better understand how a rooster fertilizes eggs, let’s have a small overview of both hens’ and roosters’ reproductive systems.

The reproductive apparatus of a hen consists of two parts; the oviduct and the ovary. The ova (female gamete) develop in the ovary. When the ovum is matured, it is released from the ovary and led into the oviduct. The release of the ovum is referred to as ovulation.

The presence of the ovum in the oviduct stimulates the release of certain substances that form additional components, including albumin (the egg white) and the eggshell. The entire process that leads to a fully developed egg takes approximately 25 to 26 hours. After about an hour after the hen lays an egg, another ovum is released from the ovary.

In the rooster reproductive system, the sperms only remain viable at body temperature and therefore situated inside the body. The sperms are contained within the testis and produced during mating. These germ cells then proceed to the cloaca via the vas deferens.

Present on the back of the cloaca wall is structures called papilla, which serve as the mating organ. The female cloaca serves as the vagina and the receptive organ of the male papilla.

The process begins with elaborate foreplay, performed mainly by the rooter. The rooster initiates the process by dropping one of its wings and then begins a spinning process. The hen will then crouches as a show of submission and receptiveness to the rooster.

The rooster mounts on the hen, grubbing her by the neck feathers, comb, or skin on the back for support and stability. A quick walk in the back of the hen allows the rooster to get into the proper position where the two cloacae can meet for the fertilization process.

Once the rooster finds the correct position, it dips his tail to one side of the hen’s tail and spreads the tail feathers to expose the cloaca. The two cloaca approximate and finally come into contact. The contact stimulates ejaculation, which releases sperms into the female representation of the vagina.

Each mating leads to a series of ejaculation with a total volume of about 1ml containing between 100 million to 5 billion sperms. The count reduces as the day progresses and with a high number of mates. The hen inverts its cloaca during mating, and this transfers the semen into the oviduct.

Only one egg can be fertilized in a day, but the sperms can remain viable in the oviduct for more extended periods. This means sperms can be available to fertilize the ovum released days after mating.

Can Fertilization Fail Even With Mating?

The success of copulation depends on several issues. First, the rooster must have the correct mating technique; otherwise, it will be shooting blank or off-target. The male and female organs mating organs must be perfectly oriented for the female vagina to receive the semen.

Second, overly aggressive roosters may scare the hens, mainly when you do not supervise. You will be assuming that the rooster’s presence among the females is a surety that mating occurs. Furthermore, a large ratio of roosters to hens can reduce sperm count, which may interfere with fertilization.

Third, only healthy roosters can reproduce. Anything that interferes with your roosters’ health status can reduce sperm count or lead to poor quality sperms that cannot migrate into the oviducts to fertilize the ova.

The last reason that may lead to fertilization failure is poor nutrition. Sperms are synthesized using nutritional ingredients present in the chicken feeds. Therefore, you must feed your roosters to give them the necessary nutrients that boost sperm production. Read this article for more information on feeding your backyard chicken.

The information may be a mouthful, but that’s precisely what you need if you must understand how rooster fertilizes eggs. Having this knowledge is crucial if you are a small-scale or hobby poultry farmer. It is even more critical when you need to start a new flock of broilers. You will now be sure that the egg you have in the egg incubator will successfully hatch into healthy and vibrant chicks.