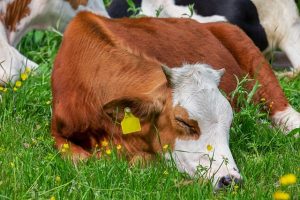 Many of us have heard about the phenomenon of animals sleeping while they are standing. It is something that is not that usual and it appears to be hard to believe. When it comes to cattle, since they belong to large livestock, some people think that they actually can do it.

Nevertheless, there are some animals who are able to sleep on their feet. There are several reasons to believe that in order to rest, all animals, including humans need to lay down.

But, do cows really sleep while they are standing? And if they do, are they able to rest that way?

Which animals sleep while standing?

The feature to sleep while standing needs a special kind of ability called “stay apparatus”. Some animals have that skill because their joints are immobilized while they are on their feet. Here are some examples:

Horses need about 5 hours of sleep per day to rest, but only 30-45 minutes of actual REM sleep. During the day, they can sleep on their feet, but it is a kind of light sleep. They are always alert of possible danger to wake up. So, their daytime sleep can occur while standing.

These tall animals, when they are adults, need 4-5 hours to sleep in a day. They usually separate that time to sleep while standing and each sleeping period lasts about 10 minutes. While doing this, they experience a kind of “doze off” situation.

You see, animals like this and like the rest of this list, have developed this kind of resting to stay protected from predators. Their bodies require only a few hours of sleep and they can half-sleep standing while their eyes are half-open.

A desert animal, with the same “built” in leg joints as the previous ones, would be able to also sleep while standing. Camels are extremely stubborn but also very sturdy creatures. They usually sleep 6 hours every night and they sometimes also half-sleep on their feet during the daytime.

Adding to that, animals that have these sleep habits, apart from the fact that it is a defensive mechanism against predators, do it for another reason as well. Sleeping while standing helps with the digestive system. Their organisms take more time to complete the digestion process and sleep like that assists in that.

Elephants live mostly out in the wild and know very well how to protect themselves. They are pretty large and have the ability to stay awake for 3-4 days until they find a safe place to lay down and take a rest.

Most of the time, they sleep while standing in small doses and they require 2 hours per day to do that. They avoid REM sleep, but when they are in captivity and the danger is less, they can rest for more than 2 hours (meaning about 5 hours).

If you take a look at zebra’s anatomy, you will understand why they can also sleep while standing. They belong to the same family as horses, and they usually sleep in groups to avoid danger when it comes. They sleep for about 7 hours per day, but most of them are on their feet!

Can Cows Sleep While Standing?

As mentioned before, this phenomenon is not a very common one. Let’s admit it, it reminds us a little bit about the myth of cow tipping.

Nevertheless, cows have the same defensive mechanism as the animals above. Their bodies are telling them, in order to be safe, to sleepless time laying down. Let’s take a look at a cow’s resting habits:

As we can see, although some animals can sleep lightly while standing, they also need “real sleep” time in order to naturally rest. To answer properly the question of whether cows sleep while standing, we must say that the answer is yes and no at the same time.

While they are standing, they are in a semi-awake state to stay safe if any predators are close. On the other hand, when they lay down, which is something they need, they really sleep and are going through the REM period.

So, keep in mind, when you take a look at a farm, you might see the cows laying down and you might believe they are sleeping. Since they need only a small amount of sleep though, if you observe them closely, you will see them moving their tails or their ears, which means that they are only fooling you!