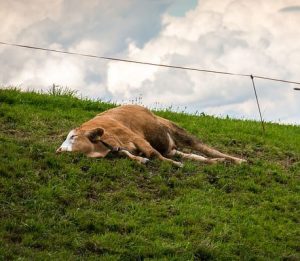 Cow tipping is a very well-known activity throughout the U.S.A and is used in common everyday phrases. Although some people refer to it as something that can actually happen, there are many elements that propose the opposite. Its roots come from a long time ago, and it has remained as a notion even nowadays.

The purpose here is to find out what exactly is cow tipping and if someone is able to do it. By taking it a step further we will ask ourselves: If a person can perform it, does cow-tipping kill cows? In addition, why do people have the impression that this is an act which might result in the death of a cow?

What Is Cow Tipping?

Cow tipping is the act when one person (or more than one) pushes a standing cow and it falls down. It is some kind of a prank, and it supposedly happens while the cow is sleeping on its feet. It is well-known that this is an activity which people do while they are drunk, clearly for entertainment reasons.

As we know, cows are really large animals and we can imagine the difficulties which will surface in this situation. Despite that, the first question we must answer is if it is actually possible to tip a cow!

Why You Can’t Tip A Cow

Let’s be honest here: Despite all the alleged testimonials online, it is almost impossible to tip a cow. This notion has grown as an urban legend around the countryside, but there are many obstacles If someone tries to do it.

Last but not least, the cow possibly, since she will not be sleeping, will understand that you are approaching her. When you are near, she will either leave or, if you try to push her, she might even attack!

Is It Really Possible To Tip A Cow Somehow?

Despite all these, there are two ways to tip a cow. The first one Is in theory, and the second one is actually happening.

As mentioned before, cow tipping simply cannot happen. But to answer the main question of this article, we will presume that a cow is pushed and falls on her side. Would that be fatal for her? The answer is no, and here is why:

Cattle are tough animals. Even if they fell on their side, they wouldn’t be injured to the level of dying. They possibly would have minor injuries on their sides. Moreover, it would be like a regular fall for them, like it would be for us.

Nevertheless, that doesn’t mean that it wouldn’t be dangerous for them and that is why it is illegal even trying to do it in many states. The reality is though, that it is more possible to hurt yourself than the cow! Especially when she gets up angry after you just pushed her.

Why Do People Think That Cow Tipping Is Lethal?

There is a false notion when it comes to the fatality of cow tipping. The reason is the way cows are found when they have passed away. It is amazing how people may misunderstand a situation like this.

When a cow dies, she lies on her side and her limbs are outstretched, which is the result of rigor mortis. This is a state we all go through after death, in which our body is cold and unmovable. Because of this appearance, some people believe that this posture is the result of cow tipping.

As you can imagine, this is a false idea.

To sum up, it is actually impossible to tip a cow. Trying this would be dangerous not only for you but for the animal as well because it would cause stress and fear to it. Cow tipping is an urban legend that you should never try out.

All things considered, cow tipping cannot kill a cow. It can injure or kill you though. So, next time you come across a cow lying down with her limbs up in the air, you will know that it was a cow that died some way, but not from the tipping!!